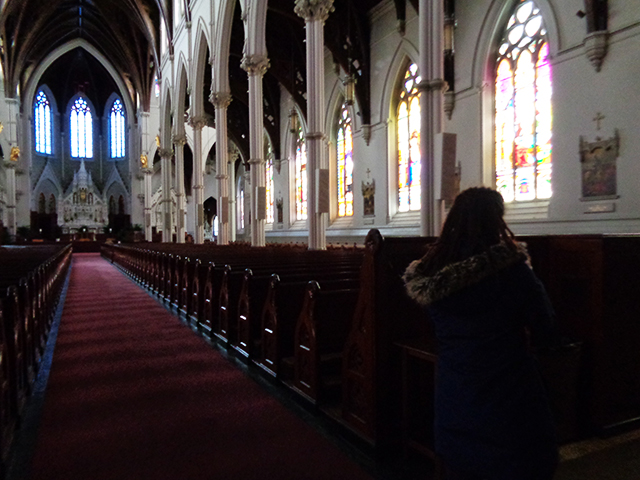 There are few places, spaces, events, moments these days that draw together the entirety of the peoples. Maybe this is more apparent to me because I was homeschooled, so I never knew age-lumping until college. But, really, besides the sacred or secular feasts (Christmas, for instance, maybe Thanksgiving), when do the old and the young and the babes-in-arms all gather together?

One of the final places of cross-generational gather is church.

Even that, though, often segregates. The old folk go to church for Saturday service, in the early evening, before dinner. The young families attend mid-morning on Sunday, between naps and meals. Often young adults, like me, fit in wherever we can, and that can frequently be the late “last chance” mass–different by region, but ask any young adult, and they can tell you where to find the latest one in the surrounding cities.

Not so on Holy Week, though.

On Holy Week there is only one option for the faithful each day, so we all gather together.

Thursday, late-morning, I sat in the Cathedral with all of the priests of the Archdiocese, most of them dear friends to my heart. A hearty percentage know my deepest flaws (thanks, confessors) and my most sincere prayers (thanks, prayer warriors). I watched them all renew their vows to the priesthood–vows of joyful service. I heard the Archbishop remind them of the goodness of Jesus, a goodness they have sacrificed wealth and family and future for. Together, they sang a Capella, about their devotion to love.

Thursday, early-evening, I held a baby for the evening mass.

Through the grace of God, I have prayed the mass and therefore the Lord’s Prayer in countless languages– Italian, Polish, German, the native tongues of the tiny islands bordering Australian, Spanish, Chaldean. But, none of these were quite as beautiful as hearing the Lord’s Prayer in baby, which is what happened when the congregation began the familiar words and the baby I was holding started her own version of the prayer, which was basically sing-song syllables mimicking the cadence of the prayer.

She’s a beautiful child, but with special needs and a year of serious surgeries behind her. Still, she joined us, through the familiar words, “Thy kingdom come,” we said, “Thy will be done, on earth as it is in heaven,” translated into baby-babble, “Wee-O, wee-o, wee-o, wee-o…”

Today I sat solo in the middle of my parents’ congregation, hundreds gathered for the service. The teens went up to reenact the Stations of the Cross–a reflection on Jesus’ walk to Calvary. It’s a familiar prayer. I’ve prayed it since childhood.

Only, now the teens are the smallest siblings of the friends I grew up with, and they all look so big now and, of course, they are growing into their own faith experiences and making the journey of faith on their own.

There was an old couple in front of me, she with her faux fur coat and manicured nails, he with a set of thick-rimmed glasses and a handkerchief he kept pulling out so he could wipe his eyes.

The priests came and laid down completely, faces pressed onto the cold stone floor before the altar. The youngest priest was in front of me, newly ordained. The oldest one staggered as he tried to arise. These men–a lifetime of service.

A pew over was a row of the Missionaries of Charity, religious sisters who are a part of the order founded by Mother Teresa. In the past few days, one of their households, far from us physically but not spiritually, was attacked and slaughtered by an extremist group.

Holy Week is so, so many things.

Yet, there we all gathered: young, old, in-between, beautiful and broken.

Our churches, often known for elaborate displays of holy interaction are stripped of the images, the water, the statues. They feel barren, really.

Only, the faithful gather just the same.

A little boy, sitting behind me, put his tiny hand on my fur vest. He pointed, his little arm brushing my ear (I was sitting. He was probably standing on the kneeler). The altar servers had brought out a large cross, for us to process past and kiss.

Jesus, though, had been with us all along. Because he said he would join us when we gather. And gather we did. We filed into line, silent and somber, kissing the cross, and exiting prayerful.

This is Holy Week. This is church.

I’m graced to be a part of it.

One thought on “Holy Week”