I just created an Etsy shop. And it has some scarves that I created.

And then I reapplied deodorant because, tbh, it’s scary to be like, “Hey, um, world…what do you think about my art?”

Because the reality is: maybe the world doesn’t like my art.

Don’t ask me what happens then. Because I don’t have this well thought out.

(One time, when I was in high school, I was telling my brother how scared I always am to audition (I still dislike auditioning!), and he was like, “But, what is the worst thing that can happen?” and I realized that, whatever happened, I would probably live. So, people-I-know, if no one loves these scarves, guess what you’re getting for Christmas.)

ANYWAY. I made scarves. I think they’re cool. And I’m selling them and the profits will allllll go to the women I met in El Salvador in the rural village outside of Suchitoto, via a microloan program for women to help them climb out of poverty.

I started with soft cotton–yards and yards of the softest cotton I could find. It came in grey. And then I began carving feathers from some linoblocks. The national bird of El Salvador is known for its bright, bright turquoise feathers, and I wanted these scarves to remember that. Bring on the turquoise paint! In the most vibrant hue I could find! Then I stamped the fabric for what seemed to be FOREVER.

(All done in love, though, you know? I stamped and I thought about the people I’ve met, the people who will wear these scarves…it was almost prayerful). 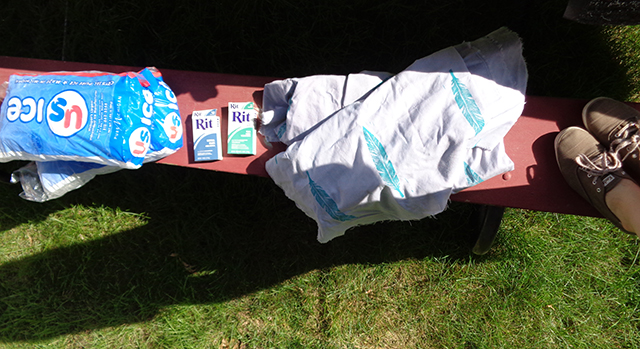 Things didn’t seem quite jazzy enough when I was done, though…and then I was introduced to a craft method called “ice dying.” YOU. ALL.

And then you layer them in that method.

If you do an excellent job, and toss your extra dye in the trash, if you’re lucky maybe a sticky-fingered toddler will happen upon the extra dye and get it EVERYWHERE and you’ll get a text from your mom and the toddler’s mom while you’re at work with several pictures of blue EVERYWHERE and the words, “Guess what happened?”

Not speaking from experience or anything.

But I do like the way the dye ended up.

Cue cutting and hemming and snipping the tiny threads caught in the hemline.

So, yeah. I made some scarves. I want to use them to raise money for El Salvador. I opened an Etsy shop. I’m terrified. Because it’s scary to art to a new level. It’s scary to be vulnerable and generous. Legit scary.

All in a day’s work, right?

But, what’s the worst that can happen, right?