I’ve been friends with Kathryn for some time, even though neither of us can remember when we first met each other.

And we often talk about this and try to remember. But we never can.

The most vivid of memories was that I somehow felt like Kathryn should be involved in a play I forced all my friends to participate in. So I invited Kathryn to dinner at a Vegetarian restaurant (this sounds like the shadiest thing ever, I know, I know) and the line was super busy and we needed to wait for, like, a half hour on a bench outside and I was like, “Might as well cut to the chase, wanna do a play?”

And I legit whipped out my calendar and she was like, “That date you circled is a French holiday.”

Kathryn wanted to be around Detroit, so we spent the better part of a morning driving about Detroit and taking photos.

Now, Kathryn wanted her pictures to say, “Detroit,” and I think we did a good job to that end. However, some of her reject photos were also cool, and I played with them a bit today in Photoshop because I wish I was awesome at Photoshop and I’m not; and practicing helps.

I love this shot. I love her face.

I also dig her hair here. This is before I dragged her into a green house whose humid fingers tugged upon those curls. 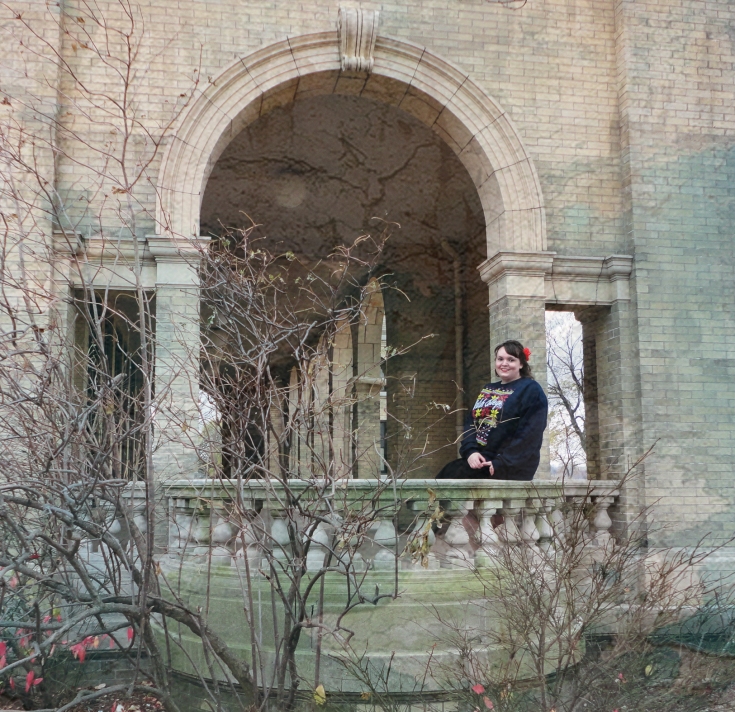 And this one reminds me of Snow White.

I see why she didn’t want to use it, though, because that building is a little obscure (who can name it? Anyone? David??).

I dig it, though. I like the building and the fall trees.

There was a squirrel in those bushes and it jumped out when I walked closer and I think it startled me so I told Kathryn, “Squirrels don’t understand great art.”

I like this one because of the juxtaposition of the green of the cacti and the red of her flower/ shoes. I like how she kind of looks like a tourist. I like how she’s all feminine and soft and surrounded by poke-y cacti.

This is Kathryn praying in front of Fr. Solanus Casey’s tomb. I snapped it undercover. Call me Private Eye Nell. It’s probably illegal to do that, or something.

But, I liked it because I think this shot captures a large part of her life: seeking the will of God.

Then I saw this squirrel and it posed for me. It’s ironic because he’s in front of our grand Institute of the Arts.

I’m sure Kathryn won’t like this one for some reason. But, I love it. I love her feminine strength as she stares down the camera. I think this is fantastic.

I think she went with this one in the end since she does library things with most of her paid time. “Knowledge is power!”

So, that’s Kathryn. May her picture be featured more around these parts. 🙂 ❤

Thanks for reading and for taking a look at my picture practice, guys!