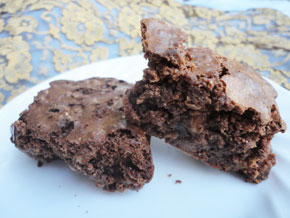 These brownies! These are the ones that change my life, OK?

But, real talk, baking sans-gluten is this battle I’m kind of apprehensive to fight. For one, most gluten-free baking recipes call for multiple kinds of flour and a magical substance known as “xanthan gum” which, when I checked at the grocery store, was around $14 for what looked like maybe two cups. Also, there’s only one gluten-free person in my house (me) and it seems excessive to spend fourteen bucks just so I can eat sweets, you know?

Therefore: I haven’t baked in a while.

And I used to be relatively good at this baking thing.

Enter this recipe by Martha Stewart. No weird ingredients. I’m down with that! 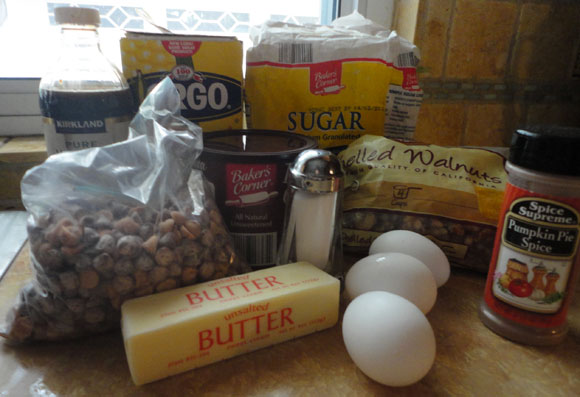 Here are all of the ingredients you’ll need. The only one I had to buy was the cocoa, but only because I was out…I usually have some unsweetened cocoa powder on hand. 🙂 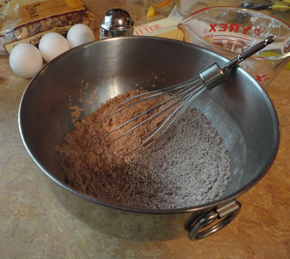 This will yield one 8×8 square pan, so prep that by lining it with parchment paper. Heat your oven to 350 degrees.

Now combine the cocoa, cornstarch, salt, and spices in one bowl. The original recipe called for cinnamon. But, I’m a free spirit and sometimes I add pumpkin pie spice instead. It’s my friend.

I cut the butter in little tablespoon amounts (tip for beginners! There are little markers on the side of the packaging that break down how much butter equals one tablespoon #lifetip). The recipe calls for six tablespoons, which need to be placed in a microwave-safe bowl.

Add the chocolate chips to the microwave-safe bowl as well.

Life confession: I had tried to make this recipe a week or so back. I keep the chocolate chips on the highest shelf in the kitchen. When I reached for the bag of chocolate chips, they spilled EVERYWHERE: the counter, the floor, in the toaster, on the stove. You see, someone (it could have been me, really) didn’t properly seal the bag the first time around. So I tried to save the ones that had fallen in hygienic areas, threw away the rest (i.e. the larger percentage), and was frustrated. 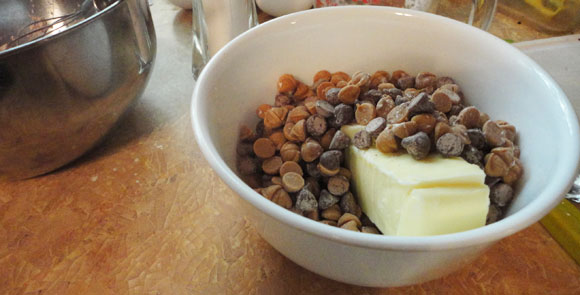 I’m telling you this because, as you can see from the picture, I have a mixture of chocolate and butterscotch chips.

It’s my fault I didn’t have enough chocolate chips from the start.

But you know what? Happy mistake. These were still AWESOME.

I’m telling you this so that you feel like you have the freedom to do what you need to do.

Melt the butter and chips in the microwave. I kept taking mine out in twenty-second intervals to stir because we have a super sonic Jetson microwave.

This step should take about two minutes before everything is melted and mixed.

Note: you don’t want to heat the chocolate so much that it burns, OK? That’s why you take it out and stir it every twenty-thirty seconds. Burned chocolate is ruined, stinky chocolate.

Again, I’m telling you this so that you feel like you have the freedom to do what you need to do.

Add the sugar and the vanilla. My vanilla clumped in the sugar. But, that’s OK. It mixed into everything in the end.

Mix both bowls into a happy family of sweetness!

(I think I was technically supposed to do this in the microwave-safe bowl. But, it wasn’t big enough. And I don’t care).

Here’s where you toss in the nuts. Original recipe called for pecans. I used walnuts because

I also added extra chips, probably for the same reasons as above… but I don’t know that it made a huge difference in the taste.

Pour this into the pan, and place the pan in the oven.

Mine took 45-55 minutes to bake, and then I thought they looked excellent and I burned my mouth on the first piece.

These were SO GOOD. I thought they were good, but I haven’t had gluten for a few months now.
True test: my gluten-loving family/ friends tried them, too. And they couldn’t stop telling me how tasty they were!

Celebrate this achievement, friends, by treating yourself (or someone you love) sometime soon! Belated Sweetest Day, all.