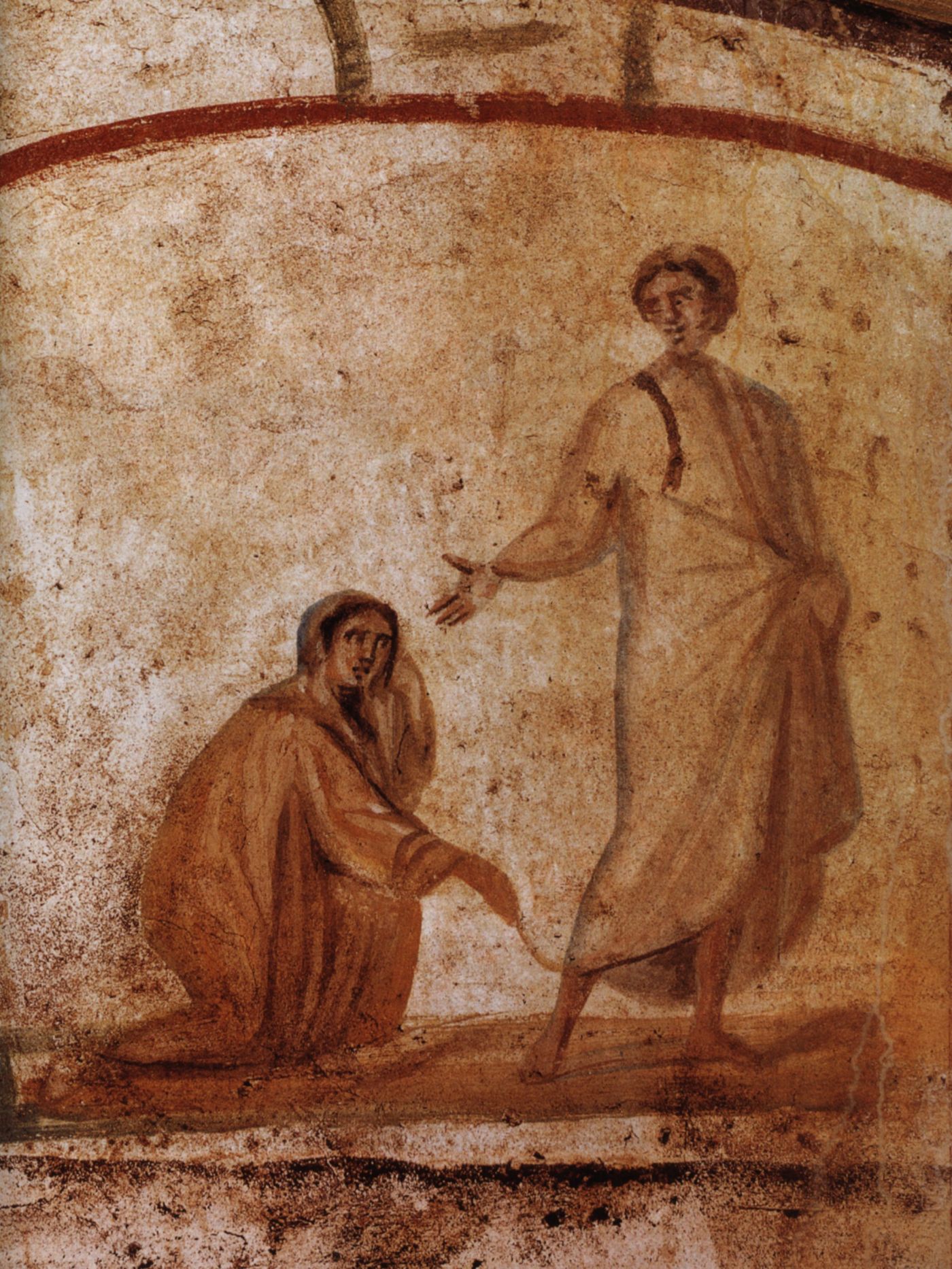 This past year my friend, Kathryn, joined a convent. She sent me a Christmas card and she was like, “You should write something about the Incarnation.”

Since buying gifts for nuns is hard anyway, this is kind of her Christmas present.

It’s not the best, but I tried. (Also, I have another thing for you, too).

Incarnation. it’s a long word–seemingly complicated at first glance-but its meaning reaches deep into your very fibers, warming the shadows and casting out the chill.

My friend, John, would describe it like this: “And the Word became flesh,” which, while using more familiar terms, like “flesh” and “word,” makes it more poetic and still, somehow, hard to grasp.

Here comes an uncomfortable story–one of blood and uncleanliness, medical mystery and the flash of light where hope meets despair. Does that make you uncomfortable? I would say it makes more people uncomfortable–but never him.

And how keenly I felt that way, daily, wringing my sticky blood-soaked garments out, the browned fluid tinting clean water dirty, tainted, unusable.

Each of us is only given so many resources–and the ones I had, I took to try to be fixed of this bleeding so the pain would stop.

What stooped my shoulders more than the hurt, though, was the constant inner battle: “Should I be spending my money on this fight? Are there other, more important place these resources should go?” Which are code for: “Am I even worth of this effort?”

That is what knotted me up. That and my shame.

Of course I knew that I deserved suffering–if deeply questioned, I feel we all would agree that, in many ways, each of us have somehow broken the law of God, distanced ourselves from Him.

One day a story began to circulate through our village. Perhaps I don’t even know the full story arch–I who lived on the fringes
due to the embarrassment
and the social distancing
and the blood.

It was said that a man was in these parts who had been healed by a new healer. The man-healed had been asked a phrase that began haunting the recesses of my mind–creeping in and mulling over and over until I could dismiss them no longer. The words were: Do you want to be made well?

Do you want to be made well?

Do you want to be made well?

The question played over and over–asking me, “Will you risk for healing again? Will you continue to hope in the midst of broken, shattered dreams? Will you lift your head? Do you want to be made well?”

And the answer is and was: YES. Yes, oh God, in my stooped state of seemingly heavenly rejection and medical failure and cultural exclusion and personal doubt, yes, yes, God, I want to be made well.

One morning, I set out to find this man, as the promised blush of sunrise was just gracing the sky.

Deliberately setting forward is a dangerous act–no one knows what lies before us–and choosing to exit the comforts of our routine hold no guarantees of a pleasant ending.

Still, this: do you want to be made well?

Every crooked step I took on pained feet echoed the question anew in my mind.

I saw the crowds first. My eyes filled because I knew this: they had all come, hurting like me. How much healing did this man have in him, though?

And then, I wondered, how would I reach him without defiling him? And, I hope you will understand here the depth of my hurt, that I decided this; I wouldn’t tell him my needs. I wouldn’t tell him of my uncleanliness. I would only, I thought, need to touch the hanging customary tassel of his prayer-garment. If the stories of His great haling power were true, that alone would be enough.

I worked my way closer through the crowd, down the road past other wounded people. They said He would pass this way, so I found a place to stand in the crowd, as it began to close around me, I stood, too, waiting for this.

The visual representation of hope is hard to describe. but, for me, it occurred as the crowd ahead of me began to shift and and excited murmur broke through–he was coming. Even then I spotted a glimpse of off-white tunic and my heart knew: this must me Him. He would be passing here soon. I knelt.

This was my prayer: Oh God, I don’t need much from you. Only please, please, make me well.

He was coming, and passing quickly, surrounded by friends. I could act fast, thought, and I needed to do so. I reached out my hand, as I saw others doing. I saw the tassel closest to me–approaching, approaching–then, suddenly, quickly, it was within arm’s reach. I grasped it, for a second, slid through my fingers as he passed. Like that, He was gone. My forehead hit the ground.

Breathe, I told myself, breathe.

In those quick seconds I knew: the blood had stopped. I had almost forgotten, really, what that would feel like.

But, then, a disturbance in the crowd and I saw Him asking: “Who, who touched me? Who has been healed?”

But, because I felt indebted to Him, I stepped forward, towards Him, and said, “It was me.”

He turned. To me. He held out both hands and smiled, thought his eyes, a love that ignited every dying ember of hope and love in my aching heart.

To talk about the incarnation, the act of God becoming man, is for some, a heady, book-rich discussion.

To me, it is the look of a man who saw my pain and wanted to know me.

When I was in the shadows, He wanted to pull me to light.
When I only wanted to brush Him, He wanted to know me.
When I was willing to hide my face, disappear into obscurity, he wanted to find me, to have me, to be with me.

The incarnation means that when I’m willing to settle for a grasped miracle–he wants to see me, to join me, to hold my hands and my heart.

And, as many times as we hear the other lies are the multitude of times truths reign from his love, his arms, the blood & water flowing from His side-wound shouting incarnate: you are not, you have never been, you will never be alone.

He is here, with us. Emmanuel.