….and I want to do more than is even possible.

I’m writing a blog post right now. BUT I WANT TO WRITE A PLAY!

I went to an aerial class tonight. BUT I WANT TO GO TO AN ACRO CLASS AND A DUO-AERIAL CLASS!

I carved a linoblock last week. I HAVE FOUR MORE IDEAS FOR THINGS I WANT TO CARVE. I want to print them all! I want to sell them on the side!

I was invited to a party. I WANT TO THROW A SPRING DINNER PARTY (four courses? Five??) AND ALSO AN ACTING EVENT AND ALSO MAYYYYBE A TRAVELING BRUNCH WOULD THAT NOT BE FUN?

I was invited to a small group. I WANT TO INVEST IN THE SMALL GROUP MY SISTER AND I HAD BEEN BUILDING THE LAST FEW YEARS.

Thing is: everything takes time. I just told you my personal ideas. You should see my job, my job requires this kind of creativity every day, yo. And when I say that I want to do it all: I really, really do. Gosh! Things would be SO. MUCH. FUN.

And so much work. 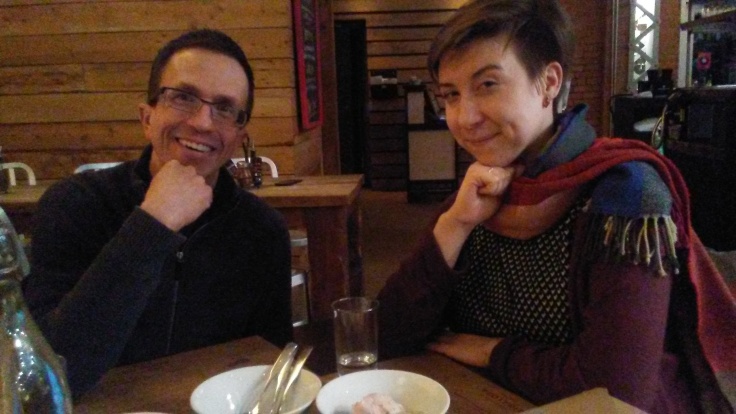 I went to dinner with these two treasures yesterday.

Guise number one was that we wanted Italian food.
Guise number two was that I needed to externally process some of my work stuff.

Reality is: sometimes it’s just super important to remember you’re human and stare other humans in the face and talk about what’s going on in the personal solar systems of the person in front of you.

And, because life is short and sacred and we only have so much time together, after all (this is something I have realized, after turning thirty), (and, also, because I had a giftcard) we went for the first and the second courses plus gelato in three flavors to split between us.

I perpetually want more and deeper.