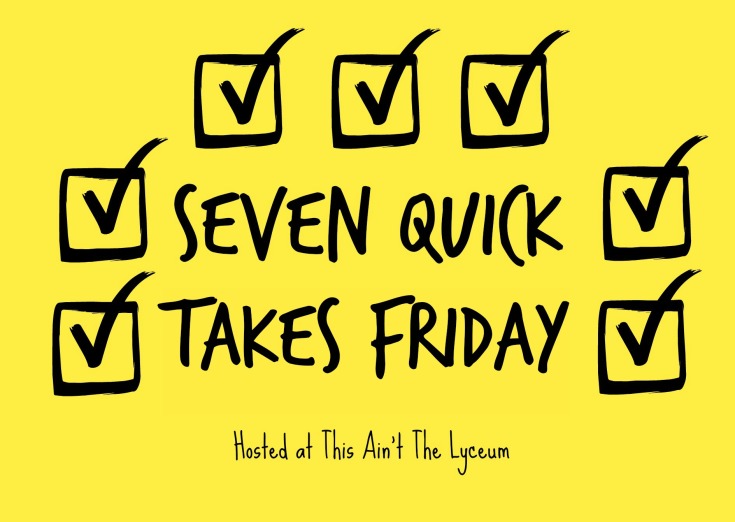 
First things first. If you don’t know that I don’t like watching movies/ films: now you know. Generally speaking, I don’t like watching them. And that’s a topic not to be handled in a mere Quick Takes. But! But. But but but. I went and saw the new “Cinderella” last night, per the recommendation of several people from different stages of life and…I was positively touched by this movie. Legitimately at some points: moved to tears.

And that’s not normal for me.

How incredible to see a heroine so dedicated to goodness–even when it was hard for her. I think that that’s what touched me: she wasn’t just predisposed to these virtues, she cried her way through them, dedicating herself to becoming a better woman.

And what a lucky man her prince was, wasn’t he? There was no doubt in my mind that she would be a good queen. Why? Because she was a good woman. Oh, and she was beautiful, too, sure. And she could dance well and carry herself with grace (and, celebrate that, oh women! Nothing wrong with looking beautiful and being happy and charming at a party), but she was also good to everyone who crossed her path, considerate to those in need, dedicated to finding beauty around her.

I’m not going to ruin it, but: that final line to the stepmother. I’m still in awe.

There were several lines in the film where I was like, “Dang. That’s a line of truth.”

FOR REAL, HOW COOL IS THAT.

I came across this on Pinterest. Judge me. Go ahead, I’ll take this sappy saying, if it makes me happy. And it does.

I have this one seester. And she told me it would be fun to run a half-marathon. That is literally what she said and all it took, “Oh, yeah, you would have so much fun running a half-marathon.”


And I believed her.

So now I signed up for a half-marathon. It’s next weekend.

Do you want to hear about two things?

If I die next weekend: I really enjoyed sharing my thoughts with you. I read all of your comments. ❤

Simcha Fischer is legit. And she wrote some internet about food stamps and it was really humane and understanding, and maybe you should read it.

AND AS LONG AS WE’RE TALKING ABOUT INTERNET-WRITING, this article on the cheating in Georgia was RIVETING and I read it all, complete with sound effects (Me: “Gasp!” My mom on the couch: “What? What’s going on?”). Riveting, I tell you.

Did you want lighter-internet? Funnier internet? LOOK NO FURTHER. I have the internets you need!

And guess what? Today was that day. I was wearing a shirt and another shirt (sometimes I even wear three) and a sweater and a down jacket but then, when I went outside…I didn’t need all of those things. My dashboard-temp gauge (which is, admittedly, sometimes wrong) said it was in the seventies. And I drove with my windows down.

I guess today is a magical kind of day. 🙂

OH, AND I SAW FORSYTHIA WHICH AMAZE ME EVERY TIME–HOW?? IT IS SPRINGTIME AGAIN? THIS IS A MIRACLE. THERE IS ENOUGH MAGIC IN FORSYTHIA TO MAKE PEOPLE FALL IN LOVE, I’LL BET. I BET THAT’S JUST POSITIVELY THE CASE.

Maybe you’ll fall in love this weekend. I sure hope so.

One thought on “SQT: I watched a movie. That’s blog-worthy, RIGHT?”