WOULD YOU LIKE TO STARE LONG AND HARD INTO THE FACE OF EMOTIONAL-EATING??
Allow me to present my dinner:

This is how I respond to long days, apparently.

Last Sunday, when I went on a hike, I decided to snap some photos, “in case I ever needed them.”

Well, guess what I need today? Some photos.

I failed a lot todayyyyy.

The first thing I did this morning was to go in the basement and flip on the lights…accidentally waking one of our friends who, unbeknownst to me, was sleeping in our basement. THE RUDEST.
Then I was caught in ugly traffic.
Then I was late to work.
Then I screwed something up at work (kind of big time).
Then circus class (read: my outlet for exercise/ my sanity) was cancelled.
Then….

I think you get the point.

I tell you this because it’s easy to portray a certain image on social media. “Hey, look at me, I happen to have my life together and what not.”

I dreamt about Nazi-guys on Monday night.

I once kept a dream journal because a college course required it, and I actually learned about myself, which surprised me. One thing I find is: when I feel like things are a little bit out of my hands, I have vivid, vivid dreams (often with Nazis) where things are scary and detailed. On Monday night, for instance, I was living in an abandoned house in Detroit, and the Nazis had overtaken the city, and so we were trying to lay low and survive without them finding us. “We” being myself (a rogue leader of sorts), but also my sister, my real-life sister, Christine; and one of my real-life white-haired coworkers, Sue; and a mom with her child who didn’t understand the importance of quiet, so sometimes the child would yell out, and I would tense, afraid we would be discovered. There were eight people total I was in charge of, I think. Once or twice I snuck, under the cover of darkness, to the outskirts of the city, where the Nazis didn’t occupy, and I tried to find provisions for the women. I think once I brought back a jar of peanut butter. Another time a group of Nazis marched by, and I crouched in a corner of the house where we were staying–I remembered staring out of the broken window, at the ragged curtains swaying in the cold that is Detroit in the winter. On one occasion one of the soldiers entered the house, and I was so afraid that the child would cry out and we’d all be given away. We eventually decided we would all try to escape to the outskirts of the city, but maybe in two groups, I think…

What I’m saying is: these dreams are ultra vivid and involved and long and I wake up feeling anxious, which is never a good place to be.

And, as I learned from the dream-journal experience, I dream these when there’s a lot going on and I feel like I’m in charge of things that maybe I don’t have a good handle on.

This evening I started to tell my mother a list of the things I’m doing in the next week, numbering them vocally.

And, it doesn’t matter, but I named fifteen points, all equally important.

Knowing this list, I think I know why I dreamt about the Nazis this time around. 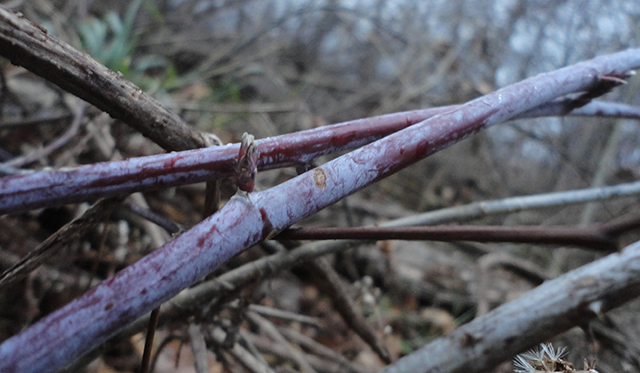 On Sunday, during my hike, I asked God about this Advent, what I should do to prepare. He gave me a singular word: simplicity. Simplicity. In prayer, in art, in gifts, in scheduling.

I was on board. I could picture a clean, rustic Advent with candles and “Silent Night” playing in the background, ya know?

But, then, of course, I dream about Nazis.

Is this the struggle of the season? Trying to pay honor where honor is due? Trying to stay focused and prayerful in the midst of all. the. other. things? Maybe.

Yesterday I went to adoration–my stupid, feeble attempt to grasp at the semblance of a solid prayer experience.

Father Ryan and I had talked about finishing up another one of St. Ignatius’ exercises, if I felt like it.

So, I started, a few minutes after entering the chapel.

I share this so everyone can judge me, mind you.

Now, when you pray through the spiritual exercises of St. Ignatius, you let your imagination guide you, even if it seems weird. The thought is that God will guide you, and you can discover things in new ways through the tool of imagination.

So, I started. In my mind, I was at a table, with Mary and Jesus. Only, I realized that the “table” was a mushroom. And our stools were thimbles. And that I was a fairy. And I thought to myself, “WHAT?? This should not be my prayer,” but, I followed it, because that’s what you do in the spiritual exercises. I talked to Jesus and Mary for a bit, and they comforted me, as they always do. Until, eventually, Jesus was like, “Well, why don’t you lie down and rest?”

And, just past the mushroom-table, there was a bed inside a walnut-shell-half and you don’t need to tell me how strange this is because: I know, I know. It was cushioned with the softest sponge and had the softest light grey blanket. So, following my imagination, I did.

AND JUDGE ME HARD–I FELL ASLEEP IN REAL LIFE. IN THE CHAPEL. WITH GOD AND EVERYONE WATCHING (if you read this and saw me there, legitimately, I can’t believe that this happened).

And I woke up much, much later, better rested than I’ve been for several nights of anxious-dreams, and I realized: that was a gift. That was a gift from Mary and Jesus.

And, probably that’s why prayer is so important in these hectic months of Christmas-prep and finals weeks…because there’s a God who cares about our rest.

So, that’s me at the moment. I take a bow after this day of failed good-wishes, this emotional-response eating. Thank you, thank you, you’ve been a wonderful audience.

And I’m going to go pray and sleep because, well, those happen to be priorities. For me and for God. 🙂

Oh, and here’s some bonus Bible. I think it kind of ties in with the thought of hectic-crazy finding balance with silence and prayer…

Then the wolf shall be a guest of the lamb,
and the leopard shall lie down with the kid;
The calf and the young lion shall browse together,
with a little child to guide them.
The cow and the bear shall be neighbors,
together their young shall rest;
the lion shall eat hay like the ox.
The baby shall play by the cobra’s den,
and the child lay his hand on the adder’s lair.
There shall be no harm or ruin on all my holy mountain;
for the earth shall be filled with knowledge of the LORD,
as water covers the sea.

One thought on “There is no title. I’m too tired.”